On the same day Circular Slovakia brought together public, private and third sectors to accelerate the transition towards greener and circular Slovakia. Holland Circular Hotspot was invited to take part in the seminar and together with Circular Slovakia (OECD) representatives, dialogue, new partnerships and exchange of experience was encouraged.

Read the press release of the Slovak Ministry of Environment (in Slovak) here! 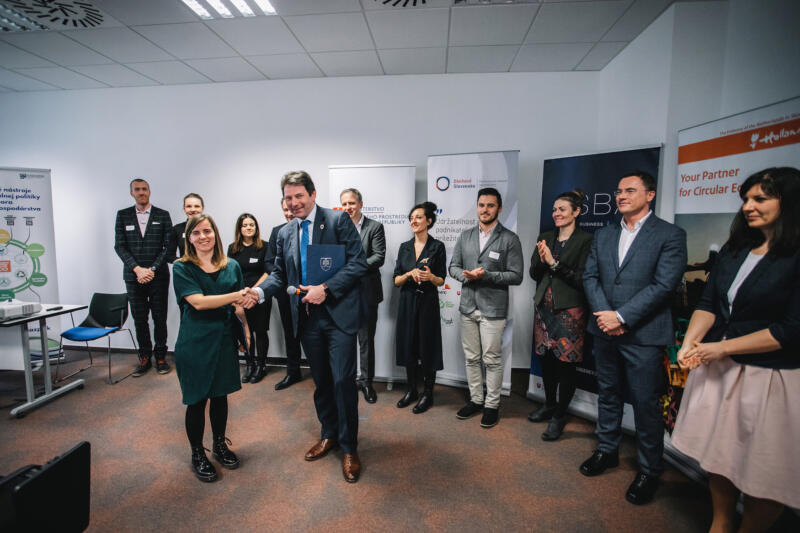 Circular Slovakia wants to support cross-border cooperation and believes to do so by joining forces with Holland Circular Hotspot. The two platforms will share knowledge, tools and good practices, facilitate connecting companies in both countries, coordinate efforts in organizing events and promote international cooperation in the circular economy.

“Circular economy is not about copyright but about the right to copy. By sharing best practices, insight, tools and contacts between Holland Circular Hotspot and Circular Slovakia we can both learn, go to the actionable level fast and keep resources in the loop much longer and keep our countries liveable and economically vibrant. It is about economy, creating jobs with a tremendous sustainable spin-off”, said Holland Circular Hotspot Director Freek van Eijk.

The exchange of experience between Slovakia and the Netherlands has been successfully operating for several years in the field of recycling of rigid plastics such as garden furniture or crates. “With our knowledge about recycling opportunities we can support Slovakia companies with their steps to a circular economy. There are already two companies in Slovakia who are working with the knowledge of Van Werven to sort post consumer hard plastics which are recycled at the Van Werven location in Gromadka Poland. The secundaire raw materials are used in the EU industry to make new products.”, said Ton van der Giessen, director of the family recycling company Van Werven Plastic Recycling.

Topics of the seminar were:

1. What is the state and development of the circular economy in Slovakia?

2. What direction does national and European legislation evolve?

3. How to close material flows through recycling?

State Secretary of the Ministry of the Environment, Norbert Kurilla, pointed out that the planet has its limits and that natural resources are not unlimited. “It is, therefore, necessary to change the current way and pace in which we use them,”he said, stressing that the transition to a circular economy will help us achieve this change. At the same time, he stressed that the circular economy has been a priority for the resort since 2016 when the so-called “T2gE” process (Transition to Green Economy) was launched.

Milan Chrenko, Director General of the Directorate for Environmental Policy, EU and International Affairs of the Ministry of the Environment, spoke about the current development of the strategic framework for a circular economy at European and national level. The European Commission, led by Ursula von der Leyen, has set itself the goal of making Europe the first climate-neutral continent by 2050, which he believes is the greatest challenge and opportunity of today. The transition to a climate-neutral economy will also require a comprehensive set of measures to transition to a circular economy. “Implementing the expected action plan, covering areas ranging from production and consumption, through digital technologies to the promotion of the circular economy in the adoption of international treaties, will require close cooperation between ministries, the private and third sectors”.

In addition to interesting lectures, the seminar provided space for 40 company representatives and other major actors in the circular economy. They were given the opportunity to express their expectations and needs and at the same time to demonstrate what they can offer when moving to a greener and circular Slovakia. According to Petra Csefalvayova from the Institute of Circular Economy, a positive change has been made in Slovakia in the last four years: “You won’t find a segment that at some point did not look for solutions in the circular economy. The market perceives its competitiveness also in its sustainable image and strategy, which it wants to offer and implement. According to Csefalvayová, in Slovakia, in many cases, it is still necessary to create a legislative environment conducive to circular solutions. Specific steps such as eco-modulation, green public procurement are becoming a reality in Slovakia and thus a tool of change and support.”