Louise Vet, gave a speech about the work of scientists with a sustainable mission in times of COVID-19, during the (online) meeting of Het Groene Brein on April 23, 2020.

Louise Vet is professor of Evolutionary Ecology at Wageningen University and affiliated with the Netherlands Institute of Ecology (NIOO-KNAW). Moreover, she is Supervisory Board member of Holland Circular Hotspot and a member of Het Groene Brein.

Read further for the English translation! 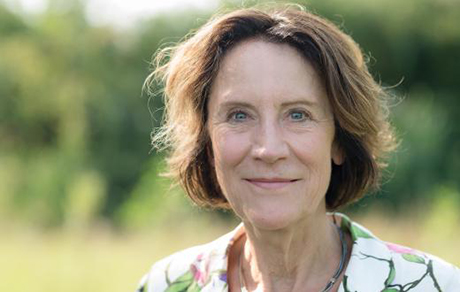 Of course it sounds super cynical, but I feel the need to say it anyway. As a biologist, I am completely fascinated by the viral violence. While Homo sapiens, as the most destructive and invasive species on the planet, thought to be in complete control, we are overtaken by SARS-CoV-2 and put in our place. The power of the small! This could be predicted from my own discipline, ecology. If you affect and undress the natural system and behave so dominantly ruthless, you will get hit. It was not the question whether it would happen, we just did not know when. But I don’t like ‘I told you’ reasoning. Yet it is confrontational. What we as sustainability leaders and pushers, despite decades of effort, have never managed to achieve will be arranged within a few months by this little monster. No more pollution, no more growth and globalization… But the hard reality is also to lose people, jobs… And that causes unbelievable suffering.

In this age of disorderly false rust, of not yet knowing and scientific quest, worldwide we are being made to face the facts: the bankruptcy of the current ecologically, socially and economically unsustainable system. We are all working on this essential system change from a diversity of disciplines and interests. Some do more from an activist-approach than others, but all based on inspiration and scientific knowledge. Although, we can still strongly disagree about the latter. But now we have been overtaken by the virus and ended up in a bizarre and schizophrenic situation, with an uncertain future that is both frightening and hopeful at the same time.

Frightening because personal loss and suffering simply count more than anything, the financial and social price is high, and fear is usually not a good advisor for a new approach.

Hopeful because many – even if forced – have discovered other values ​​such as solidarity, less ‘me’, caring for each other, respect for those who take lives and have to take difficult decisions. I also see an increase in appreciation for and confidence in science, which is working hard to find solutions, based on hard facts instead of emotional meaning. Something no science communication strategist or spin doctor would have ever managed. Although the fake news, fake scientific conspiracy theories are flourishing again as well.

The big question is and remains for the time being: is the current situation an actual reset? Is the post-Corona really changing course? Or will we soon be heading in the wrong direction, even at an accelerated pace? As we have unfortunately always done after crises in history. The signals are already there. Green New Deal? “Not now, let’s get back to work.” The same old practiced reflex. Now that people have been directly affected, governments and banks are making unprecedented financial interventions, quickly and without discussion, except for the Eurobonds. How different is that with other planetary emergencies, of which the threat still does not seem to be understood yet.

Predictions fill the papers, but I don’t dare trying. Nobody knows what will happen. But I am an optimist and I look hopefully towards that sustainable future, so I will ask the question differently. What is needed now, and more specifically, what can we as sustainability gurus do to send it in the right direction?

Because my motto is: I’d rather go to my grave in frustration than to give up now. By the way, you have to be careful with such words in Corona time when you are 66 years old … But seriously, instead of becoming depressed by the bad omens, I prefer to devote myself to the power of positivism, of achieved successes, of the good examples, of creative thinking and doing. But, as I described extensively in my sustainable speech last year, with a clear dot on the horizon; A long-term vision that, you will not be surprised to hear from an ecologist, comes from nature itself. Because the natural system, of which we ourselves are part of and completely dependent on has stood the test of criticism with 3.8 billion years of R&D. Diversity is the foundation, with risk spreading, effectiveness over efficiency, closed cycles and energy from the sun. Wise lessons.

Voilà. The only future-proof and sustainable economy is therefore one that fits within the economy of the planet, one that does not parasitize Natural Capital, but rather contributes to its preservation and recovery. Whether you are working on the energy transition, on a circular economy, on a sustainable food system or on market transformation, all innovative ideas, technologies, processes must be tested against the blue print of the economy of the living system. Nature as a teacher and economic mentor. Working with nature instead of against it. So be inspired by that nature and always ask yourself: am I actually working on a – what we call in good Dutch – ‘no regret strategy’ or am I messing with ‘end-of-pipe solutions’, so inherently wrong to design? I can name a few wrong routes: biomass for energy, CO2 storage in the soil, air scrubbers in livestock stables. That is not a system change, but sticking plasters.

If we want a system change, we also have to think in systems! So go for an integrated, coherent approach. No ‘silo’ practices like with the Top Sector Policy and the separate Climate Tables where the approach at one table creates a problem at the other (where were the scientists at those tables anyway?). Look instead for synergy, for 1 + 1 = 3, instead of everyone having to hand in something. For example, with the Delta Plan for Biodiversity Restoration, we are connecting nature restoration with various other social challenges, such as climate change, future prospects for farmers, an attractive rural area, landscape integration of the energy transition and compliance with international obligations for the quality of soil, water and air.

If we really want a sustainable impact, it requires that broad cooperation, much broader than many scientists are used to and prefer. I do not believe in a linear and therefore very vulnerable route from basic scientific knowledge to application. We achieve impact through early collaboration within a knowledge web, while retaining everyone’s own expertise and competences, but with many interactions. Where we listen to and respect each other’s interests. And where we share successes together and celebrate them publicly. My advice: build unorthodox, original coalitions. For creativity, opposition, knowledge sharing and above all support. The latter is crucial for any transition.

Never before has it been so important and opportune for scientists to unite in close Communities of Science, to collaborate on the action perspective for the desired sustainable future. But also for us counts, practice what you preach. A new era with new values ​​also demands something from us as scientists. Like influential leadership, but serving and inclusive, where public interest comes before self-interest, solidarity before ego, cooperation before competition. And let’s not make it an elite party. This heavy corona time will only increase the difference between the haves and have-nots. If we don’t break that wall, the old house will remain.

I wish all of us not only a lot of ambition and positive impact, but above all a healthy future.